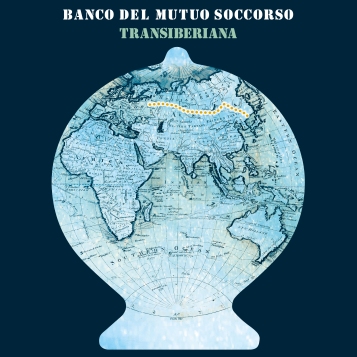 Saying that, I have never heard any of their early stuff, so who am I to be surprised? That just goes to show how insular we can become in our music tastes…….!

With their clearly stated influences of the likes of Yes, Gentle Giant, Genesis, ELP and Jethro Tull, this is a band that integrated jazz, folk and classical elements into their own sound and created some revered classics like “Darwin!” (1972), “Lo Sono Nato Libero” (1973)and “Banco” (1983). Having listened to this new album, I had better go check their back catalogue out! (and there is enough of it – see below).

The last Banco del Mutuo Soccorso album, “13”, was released back in 1994 and after twenty-five years and the loss of two historical former members, the band is back to confirm its place in the international progressive music scene. Led by founding member Vittorio Nocenzi (piano, keyboards and voice), he and Filippo Marcheggiani (guitar), Nicola Di Già (rhythm guitar), Marco Capozi (bass), Fabio Moresco (drums) and Tony D’Alessio (lead vocal), have produced an excellent album.

Superbly produced, impressively performed and artistically interesting, this album is a salutary reminder that great prog is not just from our self-important little island. I would not necessarily list the afore-mentioned bands as comparators for this album though. For me, I hear some Saga (vocally), the Watch and recent PFM (fellow Italians – no surprise), some nice angular stuff (Zappa-esque verging on the avant garde on well judged occasion) with soul, funk and jazz touches to suit, a whole raft of nicely crafted lush prog (clever time signatures, subtle song structures, interesting textures, good melodies – insert your own classic and neo-prog references), hints of operatic drama and some unique Banco nuances (you wouldn’t hear UK prog greats incorporating mandolin into rock songs usually, would you?!). And no, I am not put off by the language difference – for me it brings something different to the table, their linguistic nuances meaning that they don’t fall into anglicised cliches. Of course I don’t know what they are necessarily singing about, but I enjoy what I hear and understand musically!

Creative mastermind Vittorio Nocenzi promised an ‘autobiographical journey’ lyrically, musically and in terms of concept. Whilst I may not understand all I have heard, I think I can categorically state that he and they have delivered. “Transiberiana” picks up on Banco’s history and gives it an exciting and impressive modernity. I am not surprised that the esteemed record label Inside Out signed them up – they know a good thing when they hear it.