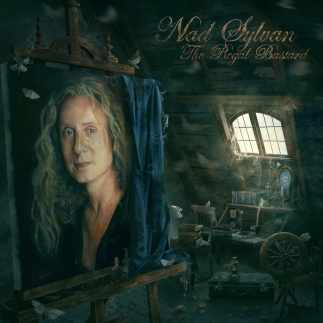 And so the gothic trilogy concludes with the album ‘The Regal Bastard’, very much Sylvan’s concept, with hands on management from start to finish, supported by Inside Out Music’s promotional know-how. In his own words: “I have written, arranged, produced and mixed the album. That’s not been an easy job to take on. But I know how I want everything to sound. I understand the way the music should be constructed and how it must flow.

So, there was nobody better to undertake that task.”

Work on ‘The Regal Bastard’ began in August 2017, when the vocalist began to record. “What I tend to do is put down my ideas, and then send these to the proper musicians, who are then free to develop them in their own ways. I can then cherry pick from what they subsequently send me”. And boy does he have some proper musical mates……

So Sylvan (sort of) wrote most of the songs, with two collaborations with noted Swedish producer Anders Wollbeck, coming up with new songs from scratch, but also revisiting ideas which he’d had in his head for a while. Then he called on his musical mates – let him drop a few names: “Almost everyone who worked on ‘The Bride Said No’ is back with me again. Steve Hackett plays guitar on one track, Guthrie Govan on two, while Tony Levin does the bass on a song. Jonas Reingold plays bass on much of the album, and Nick D’Virgilio handles the drums. And I also have the same female singers working with me once more, these being Sheona Urquhart, Jade Ell and Tania Doko. And on ‘Honey I’m Home’, there’s a big choir section, with all of these singers involved. And I also have Nick Beggs joining in on this part of the song….”

So, what does Sylvan think about the album? How does it differ from the previous two albums? “For me, this is the best of the three records. I honestly believe it will delight the fans. It is maybe not as riff heavy as the others. I would describe the sound as coming from the notion of pop going prog, with r’n’b elements in there as well. It is very soulful. But that suits my style. I am a vocal chameleon, and you’ll hear that throughout. It is the finest possible way to bring the trilogy to an end. Everyone involved has significantly contributed, and helped to turn my vision into reality. I cannot thank them enough for their involvement. As I said earlier, it is such an exciting album and one people are going to love. I am sure of that.”

So what do I think? I think Nad has a point. First track ‘I Am The Sea’ is wonderfully brooding but has an almost eighties supremely dark synth pop chorus, and the subtle backing vocals do add that bit of soul. ‘Oahu’ reminded me instantly of old faves of mine Ritual and their quirky scandi-folk, with some traditional, almost pseudo-medieval undertones. ‘Whoa’, for whatever reason, made me think of Fish’s songwriting circa 13th Star possibly as Nad’s voice is, shall we say, an acquired taste, but also because of the robust melodic rock dynamics. ‘Meet your Maker’ is a definite nod to r’n’b’ and for me is a positive indication of progressive thinking – like The Tangent with their foray into drum and bass last year, Nad is confident enough to incorporate some r’n’b elements without selling his prog soul. In fact he is all the more soulful for it, with an outstanding vocal performance by Sheona Urquhart.

The title track is the album showpiece, but for me needs several listens to draw out some of the intricacies. In that respect it reminds me of latter day Big Big Train. Lots of early promise, clever orchestration, an intriguing instrumental interlude and we’re over halfway there. Digressing slightly, a word of praise for the excellent drumming – I am sure it is not just me, but I think there’s been a quantum leap in quality and complexity in the exponents of that particular art. Back to the epic, and it continues on its pleasantly meandering route, bastarding galore to a delicate close. I was intrigued to hear Nad’s lower vocal register come to the fore in this album. And actually it’s a pleasant change from the more usual higher nasal vibrato. It certainly helps the power build in ‘Leave me on these Waters’ a dark horse contender, with its subtle and soulful musical cleverness, for best album track. ‘Honey I’m Home’ an instrumental closer bolstered by a Hackett guitar masterclass, is cleverly constructed if ultimately undemanding. Bonus track ‘Diva Time’ has similarities to the earlier ‘Waters’ track, some Hackett influence methinks, and along with the too-short two-part ‘The Lake Isle of Innisfree’, a slow burner.

My conclusion is that this album adds diversity to the trilogy, and shows other facets to Sylvan. It may lack the immediacy and earworms of the likes of Quartermaster, but instead has a soulful subtlety that demands closer attention.

Sylvan wants one day to bring the trilogy to life in a theatrical production. “I would have to carefully select songs from all three albums, and make sure they work representing the story. But that is my dream. It would be very expensive, yet if I can get the financial backing to do it, then I’d love to bring it to life in this fashion.”

3 Whoa (Always Been Without You)

6 Leave Me On These Waters

9 The Lake Isle of Innisfree