Last Flight to Pluto: A Drop in the Ocean

Alice from Last Flight to Pluto was kind enough to answer a few questions for us here at Spirit, however before we hear from Alice, I take a look at their latest album A Drop in the Ocean, the follow up to 2015’s confident debut, See You at the End.
I feel I must apologise slightly for not getting this review out quicker, but due to having been all over the country for the past 6 weeks with real life, and technical failure on behalf of my laptop I’ve not been in a position to get this published any earlier.
However, this has given me time to listen and absorb the album (particularly on long train journeys through half abandoned industrial estates and endless rows of railings) and I can confidently say that this is one of the best albums released in the first half of 2019.

If you thought they made a splash on their debut, they have come up in leaps and bounds, when 2015’s See You at the End appeared it was almost out of nowhere, with this fully formed musical beast, fronted by a confident, articulate frontwoman, who plays a mean guitar.
Listening to this sees a band who are fully aware of their abilities and skills, and aren’t afraid to speak their mind.

From the opening crunch of Masheena, where Alice dissects the roles of servile women, robots and a touch of handmaids’ tale, framing a contemporary view of womanhood.
Then the mighty guitar work of Freya, Jack Parry and Ryan Alexander are displayed throughout the closest to a single on the album, the wonderfully propelling Time and Love, the trio of guitarists trading riffs and licks are reminiscent of the three guitar line up of Iron Maiden and add so much to the musicality of the band.

The Kings are Dead starts with some wonderful electronic work before launching into a riff fest, which is then joined by Darren Joseph (familiar to Spirit readers of a certain age from the band Ezra) on some powerful percussion, and Alice’s wonderful vocals come in, as her lyrics again looking at contemporary dystopia framed with some wonderful musical passages.

Throughout this album, the band are pulling together some mighty impressive sonic tapestries, blending subtle electronica, powerfully crunchy riffs, soft melodic pieces and then almighty soloing, anchored by drums of Joseph and the bass of Jay Lewis Krett, allowing that voice of Alice’s to soar across the album.

I mentioned that they appeared almost out of nowhere fully formed and raring to go, the track Coverland is autobiographical and musically and lyrically eloquently talks about the trials and tribulations of treading the boards playing other people’s songs, and the loss of personal identity and creativity that could entail.
With a powerful Zeppelin esque riff (reminiscent of Achilles Last Stand), there’s plenty of riffs, drums and atmosphere here, lyrics like ‘You wanted me to be anyone, but not to be myself’ see’s Alice setting the stall right out. Pulling on her most powerful rock voice, and angry reflective lyrics, this is one of the songs of the album, and is full of the power and passion that is exhibited throughout this classy album.

Morning Glow is powered again by Josephs’ drumming, shimmering electronics, as well as some wonderfully impassioned vocals from Alice again, whilst the way the guitars intertwine is a thing of beauty, reminiscent of Wishbone Ash again, and that beautiful chorus shimmers and exudes optimism.

There’s so much to love about this record, but I think the guitar work really makes it as they build riff on riff to an almighty musical climax, the storm before the calm, as the slower mellower parts of each song showcase their sheer musical skill, and the ability to flit from tone to tone without losing the overall flow of the song and album.

Closer Supergirl at over 9 minutes shows how far the band have pushed sound wise, mixing more of these big riffs, with some sublime electronica shimmering underneath, Alice’s vocals are full of empowerment, a nod and wink to the current mood and terminology (‘go across town set the snowflakes on fire’) complete with a funky drum and bass groove (when Joseph & Lewis Kreft get going, they are funky and really groove) mixing modern dance rhythms, indie guitar sounds, and their trademark rock makes this a real melting pot of a song.
Moving into a real rockier section, Alice takes it to a new area with a rapped section, followed by some soulful vocals and really shows the sheer versatility of the band, pulling the disparate parts together in one almighty musical whole, and indeed an empowering mission statement.

Last Flight to Pluto were a surprise when they appeared, as of from nowhere, but this A Drop in the Ocean is more than just a worthy successor, it’s a statement of intent, this is Last Flight to Pluto, making the music they want to make on their own terms, and by God, this is a mighty fine album, it’ll be thrilling to see where they take us next. 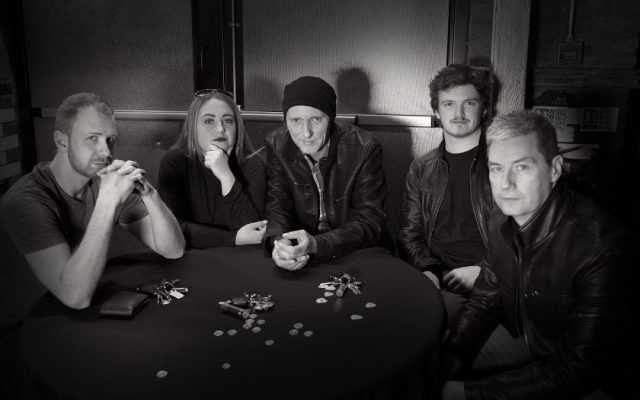 Hi Alice, thanks for taking the time to talk to me, so tell me about the new album, and the process behind the song writing?

Each drawing in the artwork visualises the lyrics. A style we adopted on our debut album See You At The End. We like to capture the essence of the song, using the artwork, like a storybook with rich illustrations.

The front cover sees the characters of the book heading towards the cliff tops, high above the ocean.

I think that social media is destroying our compassion as people. We’re becoming desensitized to everything that’s going on around us. People jump on Facebook and put a status up like ‘I’m having a bad day, but it’ll probably just get overlooked, even though that person might be trying to reach out for help.
So in amongst it all, your problem is just another ‘Drop In The Ocean’.

All the songs on the album are about some kind of personal upheaval.

We stuck to our formula of Daz writing the music and me writing the lyrics. Daz will usually come to me with a tune that he’s been playing around with and we’ll see where we can take it with lyrics and melodies.

What can people expect differently from this album?

I think you can hear and feel how much the band has developed and evolved since our first album.
If you’re a Last Flight To Pluto fan, you’ll still know it’s us, but there’s an overall feeling of the game being stepped up. The songs are more structured, the sound is bigger and the production is exactly how we wanted it.
Did you feel you had more freedom to do different/bigger things?

I think we just went with what was coming to us and we were a lot happier with the results. I think that with prog music, you’re always free to write what you want anyway, that’s the beauty of it, and prog is freedom for musicians.

If you could take one album with you to a desert island, what would it be and why?

The band often discusses this and we can’t just pick one.
If I’m in the mood for something that’s in your face then it would be RUSH – Clockwork Angels. If I’m in a chilled mood, it would be Simon and Garfunkel’s greatest hits.
So it would really come down to my emotions on the day.

Tell us something about the band you’ve never told anyone before?

I have a few little facts for you:

Have you any live shows lined up?

Our last live show was in The Musician, Leicester on June the 23rd. We’re working on trying to get more dates together for this year.
Coverland is basically about the time we spent playing as a covers band. We were playing around 180 gigs a year and making a living, but it wasn’t what we wanted to be doing. We had enough of playing other people’s songs and we just really wanted to concentrate on our own original material.
We always say that we’re a modern prog band but with old school roots
We’re looking for management now and hopefully we can announce some more live dates soon.