OK, so cards on the table: I last saw Marillion in Br 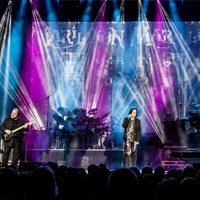 adford on their Script tour, and revelled at Grendel. And I haven’t had the privilege of seeing them again – until now. And although I have all albums somewhere in my collection,  I lost interest as I began to imagine them as getting a bit ‘samey’. And I never really got into their FEAR album particularly, but loved Gaza among others from long long longer ago….

So here I am… joining in this gathering of Marillion and their ‘Friends From The Orchestra’, at a buzzing Bridgewater Hall as they celebrate thirty years of front man Steve Hogarth being with them. And forty with the other Steve apparently. That’s quite an astounding fact when you think about it. Similar to the golden period of Genesis adjudged to be 69 or 71 to 74 or 76 (subject to opinion), Marillion have similarly had to deal with the less knowing public opinion constantly thinking of the Fish era. Shame on them.

Greeted by rapturous applause, the two violins, viola, cello, flute and French horn players (the Praise Of Folly String Quartet, flutist Emma Halnan and Sam Morris) take their places centre stage on raised platforms. Either side of them, to loud cheers, drummer Ian Mosley takes his seat to the left behind an impressive podium set and dons his headphones, whilst Mark Kelly to the right surveys his lofty keyboard rig. Stage left is Pete Trewavas, mini row of basses at the ready. Stage right is the immovable force of Steve Rothery. His impressive range of guitars are offstage behind his amp wall or whatever that huge device is. And there in their corners the band will all stay throughout, save for one early saunter by Pete. Oh the exuberance! Apart from that, they leave the stage to be well and truly conquered by Steve Hogarth.

Talking of whom, his low key entrance befits the intro to the outstanding opener Gaza, a powerful musical and lyrical 17 minute epic that dramatically envelopes the audience.  It is a stunning opening, powerful, emotive, provocative and superbly stage-managed with lights and projections. Worthy of a standing ovation in my opinion, but the Manchester crowd stay seated – for the time being.

Hogarth oozes confidence. Introducing Afraid from Sunlight, it’s light and dark sections are watched and listened to in awed silence. Hogarth has a sly dig introducing the 30 year old (really?!) Season’s End, pointing out that only now is the topic of climate breakdown, so prophetically raised in the song, being discussed. It is a beautiful track, orchestrally enhanced and just as pertinent today as it was then.

A lengthy intro to Estonia sees Hogarth in temporary sombre mood, recounting the amazing tale of the ship survivor. And it’s another tour de force performance, and worth noting that the orchestral elements fit in perfectly, and make you realise how orchestral some Marillion songs have actually been over the years.

Hogarth can exude pain and despair when he wants, and his lyrics can be equally bleak or downbeat. The Hollow Man is such a time for beautiful melancholy – but again exquisitely orchestrated.

And so to FEAR. The five part New Kings ratchets up the drama, Hogarth’s charisma and character a veritable histrionic performance, whilst the extraordinary talent of the other musicians goes through so many undulations and moods. No face paint needed. Odd clothing choices – perhaps. And yes, it made more sense to me seeing it acted and played out.

The Sky Above the Rain is another exceptionally emotive number, superbly played and Hogarth again putting so much emotional and physical effort into the number. Closely followed by set closer The Great Escape, it is a glorious end to the main set. But there’s more……

Encore Fantastic Place is quite an ordinary song in many ways, but is played extraordinarily well and suits the arrangement. But then the energy and vitality ratchets up with the energetic and vivid Separated Out, lighting and visuals erupting, and an excellent segue into an orchestral  Kashmir section before the encore closes. But there’s more…….

The enthusiastic Manchester audience, now finally on their feet, find the band willing to return for one last session. The acoustic start to Man of a Thousand Faces leads to a singalong close before the epic This Strange Engine runs that emotional gamut for one final passionate time.

So how was it for me? I was emotionally exhausted. I found I was watching Hogarth for a lot of the time. The stoic Rothery was awesome on guitars, finally breaking into broad smiles in the encores. Trewavas was a little bundle of energy in the corner, barely able to reach the end of his lengthy bass neck at times, but a true powerhouse with artistic cleverness underpinning his bass work. Mosley – I might only have seen his grinning face at the end, but – he is a stalwart performer, and so solid with all the musical complexities Marillion throw at him. And Kelly’s sanguine presence was not only physically seen (with some excellent lighting effects behind him at times) but audibly heard, either again providing the necessary layers, instrumental complexity or lead virtuosity. And let’s not forget Hogarth’s instrumental prowess, from guitars played with mock disdain, to emotive keyboard, and even a flamboyant cricket bat.

And so, a passion-filled, emotional roller-coaster of a concert is over. Superb in all visual and audio aspects, I have to say it has been an experience seeing (most of) the band that I saw all those years ago, talented as they were then, this time round performing their latter day catalogue with a theatrical lead singer able to wring every emotion out of their complex and clever songs. Marillion. Who needs Grendel? Or Fish?

The Sky Above the Rain

Man of a Thousand Faces