Been a while since we heard from Drifting Sun, and this year has seen them release not one, but two albums.

I speak to Pat from Drifting Sun later on in the week, but first I take a look at the two recent releases, starting with their new album Planet Junkie. 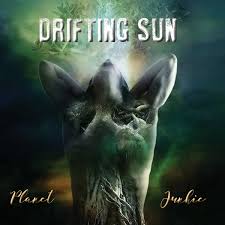 I’ve been aware of Drifting Sun for a while, particularly due to the reviews their last album Twilight (released back in 2017) and yet, this is the first Drifting Sun album I’ve listened to, and typical me, it captures the band in a period of transition, where vocalist/Lyricist Peter Falconer has moved on to pastures new, leaving the core band Pat Sanders (keyboards/music) Mathieu Spaeter (guitars) Manu Michael (bass) & Will Jones (drums) looking for a vocalist.

And you know what they say about vocalists, just like buses, you wait ages for one then three show up at once. Marc Atkinson, Colin Mold & Joshua Corum all add their very different and highly talented voices to the core band.

So Planet Junkie is split into three parts showcasing the way the different three vocalists have brought something of themselves into the world of Drifting Sun, as the core band is in place (& using bandcamp I have dived back to listen to some of the older work for comparison purposes) this is definately a continuation and development of the Drifting sun sound, and whilst you’d think having three totally different voices would jat slightly, the way that the trio of songs each vocalist sings on has been segued together, and the way it all flows perfectly, the diffferent voices complement each other perfectly. Marc Atkinson, well known as part of Riversea, opens up the album with the great Within Your Bones, whilst it’s the title track, Planet Junkie, all about our addictions to technology and the damage we’re doing to the earth is very much a song for the times, and his lyrical observations fit perfectly with Sanders music.

As this line-up of Drifting Sun have grown together musically they work so well together, the searing guitar work of Spaeter perfectly matching Sanders keyboards riff for riff as they bounce off each other throughout the album, the instrumental section in the brilliant To Tame a Star, with some amazing vocals by Colin Mold (Karnataka) who really brings his soul to the songs on this album, in fact the trio of songs he sings, starting with Night Time Sorrow, Stay with Me & To Tame a Star are a beautiful sequence of contemporary prog.

The sequence of Atkinson songs (within your Bones, Planet Junkie & the brilliant Missing) is bookended by Life, a sublime piano led instrumental where Sanders gets to show off his (mighty) skills on the piano and is the perfect introduction to Night Time Sorrow.

The band play this trick again with I Will be King leading us into the closing trilogy, and they get the great Ben Bell (Gandalfs Fist, Patchwork Cacophony, Broken Parachute) to channel his inner Jon Lord as he goes full out on the hammond organ, whilst the band really kick up a real groove allowing him to match Spaeters licks,with the sublime classic hammond sound, whilst guest saxophonist Sarah Skinner lays some immense sounds as well, this sounds like a band having real fun with a deep groove, and proves Bell is a contemporary master of the hammond, it only goes on for just over 4 minutes but I could listen to it all day.

The final trio of songs features Joshua Corum from Head with Wings, and it’s fair to say his vocal style is heavier than that of both Mold & Atkinson, and yet he complements them perfectly (in fact, maybe I’m being greedy here, but it would have been nice to have all three sing on one track) Born of a Dream features more of Sanders beautiful piano playing, which with Corums vocals over the top make a mighty sound, and the violin of Eric Boulette works perfectly hear, proving that the less is more approach works so well, Corums vocals are superb and his versatility is shown on the next track, the darker and more powerful Diogenes, where the band are taut as anything, the drums of Jones magnificent in their power, and way the keyboards, bass and guitar build across this track are an absolute joy to listen to. This is a contemporary progressive masterpiece, complex, confident and an absolute belter of a track, it has class running throughout it.

The finale of the album Everlasting Creed clocking in at over 10 minutes is the big epic, building into an epic tale of betrayal and manipulation, and Corum is a real discovery (I will be checking out Head with wings at some point soon!). This could have been a very dificult album for Drifting Sun, but with the band being so tight, and Pat being a master songwriter, they found a novel way to create a new album, and the three different vocalists bring something different to each track they sing on, and yet this is a wonderfully coherent album that has plenty of range and depth, and is beautifully performed and produced, and Pat knows exctly who to collaborate with, and where their collaborations would fit best (Bell’s hammond for instance) and Drifting Sun have crafted a magnificent contemporary progressive rock record, which is very much timeless and also of it’s time. One to investigate. 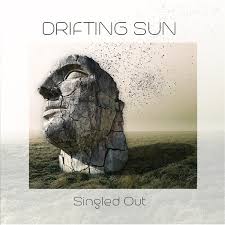 Drifting Sun have only just announced the release of compilation album Singled Out digitally on 11th November, with the CD to follow on December 9th. A treat for fans, this is the first physical release for the tracks on here, as they were all issued as ‘digital b-sides’ between 2015 and the current date, with some additional tracks included as well.

The majority of this material spans the collaborative period during when Peter Falconer was part of the group, and is a wonderful treat for fans who prefer the physical to the digital to collect all these rarities and with there being 12 tracks here, it certainly offers collectors value for money.

For those who’ve only recently discovered Drifting Sun it’s a perfect alternative timeline, and a lovely mix of instrumentals and vocals. The tracks with Peter on vocals are classic Drifting Sun moments, from the Hammill esque Lost Knight, right through to the 10 minute epic Cascading Tears, which was the last recording the band did with Peter on vocals (and was radically reworked into the closing epic Everlasting Creed) and it’s quite wonderful to hear the two differing versions, and the totally different direction that Joshua Corum took it on Planet Junkie.

There’s also an instrumental live version of Last Supper to give an idea how they sounded on stage. With a strong selection of some of Pats piano work like Emphasis (for Sienna Joy) and the aptly named Closure, this is a wonderfully allternative compilation, and has a lot of material here for you to dive into.

A blast from the past is The Blonde Ghost which was put together by Pat and Manu on a 4 track in the 1980’s and is by far the oldest piece on here. This delve into the vaults has been done with the care and attention that Drifting Sun take to all their work and this anthology provides a closure on the last era of Drifting Sun in a satisfactory fashion, collecting and showcasing what each different line-up has brought to the band, and of course the constant that has been Pat Sanders, steering the band through the changes, with his keyboard and piano and compositional skills, it’s testament to his vision that the band are still going strong.

This is an excellent companion and alternative introduction to sides of the band you might not have heard before.